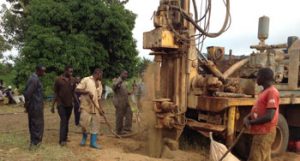 Running Well provides communities in Uganda with clean water, primarily by building water boreholes. Working closely with Father Stephen and, together with Julian’s own trusted engineers, communities are identified as being in need of access to clean water.  Each borehole lasts for at least 20-30 years providing clean water for one person for £3-£4 for life. Julian fundraises through donors and sponsorship of extreme sporting challenges such as the Marathon des Sables, 6 marathons in 7 days across the Sahara Desert. He has spoken to the parish on several occasions about the work of his charity and the importance of access to clean water in disease prevention 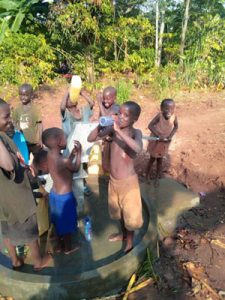 With financial assistance from Worth Abbey Parish, Running Well has successfully built 2 water boreholes at Nabitende and Namungwale in Itanda Parish in Uganda.The waer borehole at Nabitende has been built next to the local primary school which has 1,000 students. Building a water borehole next to a school means that children can fill up their jerry cans without missing classes. The water borehole at Namungwale has been built close to the trading centre and serves all the surrounding households. Handover of the completed wells to the communities tool place in February 2021 and are now helping approximately 3,700 people have access to clean water. Find out more and view slides here.

Thank you on behalf of everyone at Running Well for the support you have given the charity again this year. I also wanted to let you know that we have successfully completed our site surveys for our next two water boreholes at Budini and Bulanga, and we have found a sufficiently good water yield at both sites to serve the communities there. Both water boreholes will hopefully be completed by the end of January and they will benefit approximately 4,700 people, including 1,750 children who attend the local Catholic schools and where the boreholes are being built. I will of course let you know when they have been completed and send you some pictures and videos of the communities and boreholes when I receive them from our project team.

Project report from Julian September 2021: Whilst recorded cases of Covid-19 and deaths from the virus remain relatively low across Africa, it is likely the actual numbers are significantly higher and a very small proportion of the population have been vaccinated. The situation is therefore unlikely to improve in the short term and it could be some time before we are able to travel safely to Uganda again, which also makes our work more challenging. Read more in the Running Well Projects Report September 2021

Every penny raised by Worth Abbey Parish is used directly to build the boreholes. All the costs of running the charity are covered by Julian. Please consider becoming a monthly donor by contacting Father Paul or Maria in the Parish Office on 01342 710313 or email parish@worth.org.uk 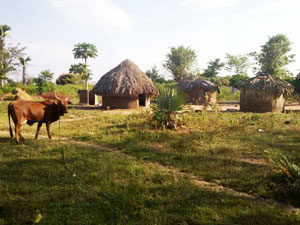 Our friendship began in 2007 following a reconnaissance trip by a group of parishioners in 2005 to find a parish in Uganda with which Worth Abbey Parish could form a meaningful relationship, one in which we could learn from each other. They settled on the parish of St Matia Malumba in Irundu, north of Jinja in one of the poorest, most rural and in terms of population structure, one of the most youthful areas in Uganda. By chance, also working in the parish was a group of the Benedictine Sisters of Grace and Compassion, the religious order which in the past ran a training facility in Compass House at Worth. The Parish Priest was Fr Stephen Mudoola, a man who the people saw as a father figure who would take care of them and he, in turn, told them that God would always provide for them. 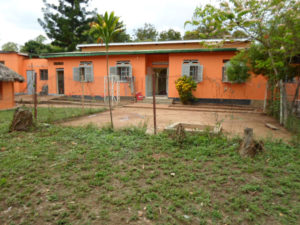 Much has been achieved in Irundu, not least the provision of a Health Centre, focusing on maternity services. The Centre has in-patient care, a pharmacy, a rudimentary lab and is viewed very positively by the local population. With financial assistance from Worth School a Vocational School has been established with training courses in hairdressing, carpentry, tailoring and motor mechanics, providing a much needed qualification for employment opportunities other than subsistence farming. The Friendship House was built initially to house visitors from Worth. Funding has been provided for an eco-friendly latrine for the school.

In 2018 when Father Stephen visited Worth he had just learned that he was being transfered to Itanda Parish, much nearer to Jinja but just as poor. The Worth-Irundu Friendship Committee felt that it was time to move with him to an equally-deserving parish having achieved all we could hope to in Irundu.

Our arrangements in Irundu were carried out in a manner no longer deemed to be appropriate in an era of heightened safeguarding. Our new support for Itanda required adherence to strict safeguarding guidelines. Julian Gabriel, a new Committee member and an Old Boy of Worth School, had recently established a UK-based charity, Running Well, with all the necessary guidelines in place and it seemed provident to support his charity through the Parish.

The Future: an Update from the Committee, June 2020

“As of January 2020, with a largely new Committee, the Worth-Irundu Friendship was set for a big rename and relaunch with events planned and the aim of funding a borehole by the end of the year. We managed to get one event done days before all fundraising events were cancelled due to the pandemic. We raised £400 at Java and Jazz in Forest Row thanks to the owners, John and Annie, who have always been great supporters of our charity.

We aren’t deterred and will press on in the future, although our big restart will probably be over 20/21 instead. Although work has been suspended here, work still carries on in Uganda and we have heard that the borehole already funded by Worth Abbey Parish is now operational and providing clean water for 2500 people.

This is thanks mainly to our regular monthly donors in the Parish who made a commitment many moons ago and have achieved so much in Irundu through their generosity.”

The Worth-Uganda Friendship Prayer
God our Father,
Our refuge in adversity,
Our strength in weakness,
Our comfort in sorrow,
Be merciful to your people.
Keep the churches of Worth and Uganda in your special care.
Increase our faith,
Give us this day our daily bread,
And help us to keep learning from each other,
Offering to each other
And receiving from each other.
We make this prayer through Christ our Lord, Amen