Home » About Us » Parish History

The Parish was created in 1957 when Abbot Victor Farwell asked the then Archbishop of Southwark Diocese, Bishop Cyril Cowderoy, whether the monks of Worth Abbey could help the Diocese by running a Parish.

The Worth Abbey Parish was created from the country area between the large town parishes of East Grinstead, Haywards Heath and Crawley. It included the villages of Crawley Down, Turners Hill, Balcombe and West Hoathly as well as the people living at Worth Abbey itself.

The Parish church was to be the Abbey Church with Mass Centres in the various villages. The Abbey church was originally a chapel which has now become part of the monastery, and the church changed to its present location in 1975 when the new Abbey Church was opened. The Mass Centres in the villages were located in churches lent to our parish on Saturday evenings or Sunday mornings by the Anglicans in Turners Hill and Crawley Down and the URC in Balcombe. In West Hoathly our parish had, and still has its own chapel, St. Dunstan’s, with Mass every Sunday morning. This chapel was bought for the Diocese by Lady Dora Wilkinson of West Hoathly. It was two cottages and a butcher’s shop which she converted into the present chapel.
The first Parish Priest was Fr. Jerome Tomlins, followed by Fr. Bede Hill (1979-1988), Fr. Kevin Taggart (1988-1993), Fr. Paul Fleetwood (1993-1996), Fr. Roderick Jones (1996-2003), Fr James Cutts (2003 -2014, Fr Aidan Murray (2015 ) and the present Parish Priest Fr. Paul Fleetwood. Up to the 1990s each of the village communities had their own priest with four priests working in the parish.

In 2003 Abbot Christopher decided that only one priest could be spared. He gave the task of determining the future direction of the Parish to the PPC which decided on the closure of Turners Hill, Balcombe and Crawley Down as Mass Centres while maintaining the chapel at West Hoathly.

A short history of St Dunstan’s written by Father Kevin. 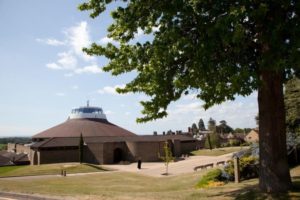