Care For Our Common Home 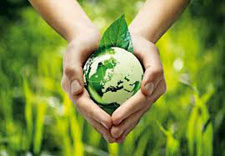 “Never have we so hurt and mistreated our common home as we have in the last two hundred years. Yet we are called to be instruments of God our Father, so our planet might be what he desired when he created it.” (Pope Francis) 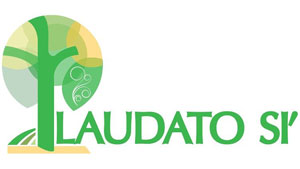 The Laudato Si’ Action Platform is a unique collaboration between the Vatican, an international coalition of Catholic organizations, and “all men and women of good will.” (LS 3) Taking a truly ground-up approach, it is rooted in the strengths and realities of communities around the world, empowering all to take “decisive action, here and now” as we journey towards a better future together. (LS 161) 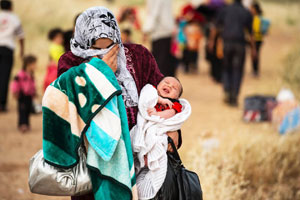 The climate crisis has a very human face. It is already a reality for multitudes of vulnerable people worldwide. The Catholic Church shows a warm pastoral care for those who have been displaced from their homes by its effects.

The Pastoral Orientations on Climate Displaced People explains the new challenges posed by the disturbing perilous phenomena of climate disruption in many parts of the globe and suggests appropriate pastoral responses.

The Diocese of Arundel and Brighton has set up an Environment Group as a response to the growing awareness of the dangers of climate change.

In March 2020 following World Water Day the Dicastery for Promoting Integral Human Development released Aqua fons vitae, Orientations on Water, symbol of the cry of the poor and the cry of the earth, as a contribution to reflections on water. This new document is rooted in the Social Teaching of the Popes; and is inspired by the work that members of the national and local Churches have been doing in several countries. “Water” is a term that calls attention to several challenges for the human family.

He focused his message on water – a simple and precious element – and described “access to safe drinkable water as a basic and universal human right, since it is essential to survival and, as such, is condition for the exercise of other human rights”.

Laudato Si (Praise Be to You) is Pope Francis’ second encyclical letter addressed to all of humanity on environmental issues, our place in creation and our responsibility to our common home. In his letter Pope Francis calls us to an ecological spirituality whereby we find beauty in every moment and are drawn towards a simpler life in which we find joy and peace. In the English language title Care for our Common Home he makes a passionate call to all people to take “swift and unified global action” to combat the environmental and social destruction in our world”.

Laudato Si summary  by Alan Rew, a Worth Abbey parishioner. Copies of the encyclical are available in the Abbey Bookshop. 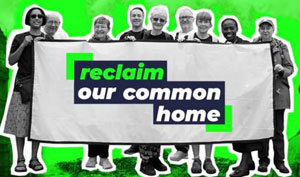 CAFOD’s new campaign is a response to Pope Francis’s call for a new way of thinking about the world, and to take an active part in renewing our troubled societies by embracing the universal values of solidarity and fraternity expressed in his encyclical ‘Fratelli tutti’.

As Catholics, we are called not to stay silent and not to be passive. This is why Reclaim Our Common Home is a call to action! It’s a call to participate both individually and collectively in rebuilding a more dignified and sustainable world after the pandemic.

As the host of two major international conferences, the British government has a crucial role to play in 2021. In the summer, Britain will host the G7 annual meeting where the leaders of the seven richest countries will gather to discuss how to rebuild after the pandemic. This will be followed by the UN ‘COP26’ climate talks taking place in Glasgow in November, where world leaders will come together to agree how they will work towards ending the climate crisis.

Urge the Prime Minister to put the people hardest hit at the heart of the COP26 climate talks. Sign the petition here.

Read Pope Francis’ Call to Fraternity: the making of ‘Fratelli tutti’ by Austen Ivereigh and an analysis of the encyclical by CAFOD.

Learn how to lobby your MP in support of CAFOD’s campaign to rebuild a better world from the Coronavirus pandemic.

CAFOD encourages us to treat our homes with respect by leading the way, taking responsibility and forging new habits. For ideas for actions take a look at CAFOD’s Live Simply Activity Poster: Reimagine Our Common Home.

Please look at CAFOD’s Campaign Materials for more ideas on how you can play your part in renewing the earth.

Fr Robert Barron has written a short message and video about ways in which Western culture came to regard the natural world as a resource to dominate and plunder, rather than the Christian concept of a sacrament of God’s own beauty and goodness.

Simplicity: Live Simply so that others may simple live.

CAFOD’s livesimply award is a way of putting our faith into action in our parish, enabling us to strengthen the bonds of community, nourish our spiritual life and care for God’s gift of creation.

The Laudato Si’ Movement, a global network of 400+ member organisations and a community of thousands of Catholics, is a response to the Pope’s call to take action in the Laudato Si’ encyclical. Click on the image for more details.

On the 1st September 2018 CaFE (Catholic Faith Exploration) launched Global Healing – How Faith helps us to care for our common home. This is a film-based resource to help us to respond to the damage we are doing to our planet – our common home. It is for parishes, groups and individuals and aims to inform, challenge and equip people to engage with Pope Francis’ vital call to Care for Our Common Home.

We are responsible for our impact on God’s creation as a whole. Green Christian helps members to understand and relate these responsibilities to their faith. Members can then encourage others in their local church to think seriously about these issues. Green Christian was formed in 1981, and formally constituted in 1982 and supports Christians from all backgrounds and traditions.

The Ecological Conversion Group is a small group of Catholic volunteers responding to Pope Francis’ Encyclical ‘Laudato Si’ in which he calls for us to be Ecologically Converted. Our parish representatives on the ECG are Sister Jo Threlfall, Alan Rew and Jenny Edwards. The Diocese of Arundel and Brighton has committed to tackling our ecological crisis through the Journey to 2030.

The mission of Catholic Concern for Animals is the advancement of Christian respect and responsibility for the animal creation with special reference to Catholic teaching and beliefs.

Eco-Catholic is a new online storytelling resource made up of animations, prayer reflections and talks to help Catholics explore and engage with the ecological dimension of their faith. This new initiative, launched by the Jesuits in Britain and CAFOD, offers a simple and engaging way to connect with the teachings of the Church through digital storytelling.

Young Christian Climate Network is an action-focused community of young Christians in the UK, choosing to follow Jesus  in the pursuit of climate justice.

Praise Be: a prayer inspired by Laudato Si

Living God, have mercy on us, for the times we forget that we belong to each other. You call us to be still, to hear the whisper of our Sister Wind, to feel the radiance of our Brother Sun and to be nourished by Mother Earth. Renew us in your healing love.

Inspire us to water the earth, and nurture one another, so all may flourish. Together, as one family, may we always sing your praise. Through Christ our Lord, Amen. (Rachel McCarthy, CAFOD)