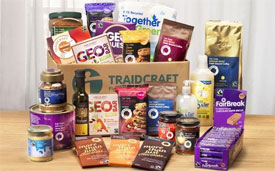 Traidcraft’s Vision: a world free from the scandal of poverty, where trade is just and people and communities can flourish.

Traidcraft’s Mission: we fight poverty through trade, practising and promoting approaches to trade which help poor people in developing countries to transform their lives.

We are very grateful for your continued support of Traidcraft by purchasing their tea, coffee, biscuits and other goodies. Every Fairtrade item bought helps to improve the live of so many disadvantaged people.

Worth Abbey Parish has been supporting Traidcraft for many years. The Traidcraft stall is open every Sunday after the 9.30 am Mass. In February 2022 the stall will also open on the first Saturday of the month after the 5.00 pm Vigil Mass. It is stocked with many kitchen cupboard essentials and a wide range of chocolates. Special orders from the Traidcraft catalogue can be placed with the Coordinator, Caroline Howells on 07905394269 or email singapore.girl@hotmail.co.uk

By buying directly from Traidcraft, rather than from a supermarket, you are contributing to the continuation of the wider work of Traidcraft i.e. lobbying policy makers, influencing other businesses and seeking to push fair trade into new areas. All profits from our Traidcraft stall are donated back to charity. For details of all Traidcraft policies and cataolgue click on the image above.

Volunteers from the parish help to run the Traidcraft stall on a rota basis and are always keen to recruit new helpers. If you would like to join the rota please contact Caroline.

Fairtrade is a global movement with a strong and active presence in the UK, represented by the Fairtrade Foundation. The Foundation is about better prices, decent working conditions and fair terms of trade for farmers and workers. Click on the image for more details