Crawley is an important centre for interfaith work, probably second only to Brighton within the Diocese of Arundel and Brighton. There are several flourishing Muslim communities, a Sikh community and a Hindu community.

The Crawley Interfaith Network (CIFN) was officially inaugurated in 2005. CIFN exists to promote mutual respect and understanding among the various communities in Crawley Borough.

Nostra Aetate: Declaration on the Relation of the Church to Non-Christian Religions proclaimed  by His Holiness Pope Paul VI on October 28th, 1965 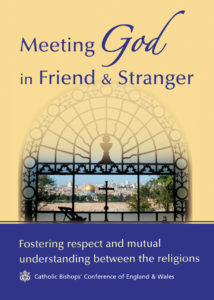 Meeting God in Friend and Stranger: fostering respect and mutual understanding between the religions; an encouragement to inter-religious dialogue (CTS, 2010). A teaching document of the Catholic Bishops’ Conference of England and Wales its purpose is to encourage members of the Catholic community to look upon dialogue as an essential part of their Christian witness in Britain today (paper copies are available in the Abbey Bookshop or click on the link above). For a commentary on Meeting God in Friend and Stranger click here

Reflections on Catholic-Jewish Relations on the occasion of the 50th Anniversary of Nostra Aetate (CTS, 2016). Looks back with gratitude at all that has been achieved over the past five decades in the Catholic-Jewish relationship. It also explores some of the theological questions that have arisen in the dialogue between the Catholic Church and the Jewish people since Vatican II. For an introductory summary of the document click here

If you would like to know more about other interfaith groups in the UK click on the following links:

Catholic Bishops’ Conference Office for Relations with Other Religions