Each year on June 20th, the world celebrates World Refugee Day, an international day designated by the United Nations to honour refugees around the globe. It celebrates the strength and courage of people who have been forced to flee their own home country to escape conflict or persecution. World Refugee Day is an occasion to build empathy and understanding for their plight and to recognise their resilience in rebuilding their lives.

The focus of World Refugee Day 2022 is on the right to seek safety.

Whoever. Wherever. Whenever. Everyone has the right to seek safety.

Whoever they are, people forced to flee should be treated with dignity. Anyone can seek protection, regardless of who they are of what they believe. It is non-negotiable: seeking safety is a human right.

Wherever they come from, people forced to flee should be welcomed. Refugees come from all over the globe. To get out of harm’s way, they might take a plane, a  boat or travel on foot. What remains universal is the right to seek safety.

Whenever people are forced to flee, they have a right to be protected. Whatever the threat – war, violence, persecution, everyone deserves protection. Everyone has a right be safe. 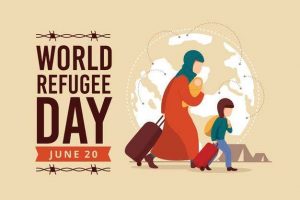