Refugees and the New Anti-Refugee Bill

The new Nationality and Borders Bill introduced in Parliament on 6th July 2021 will mean more than 9,000 people who would be accepted as refugees under the current rules – meaning those confirmed to have fled war or persecution following rigorous official checks – would no longer be given safety in the UK due to their method of arrival, according to the Refugee Council’s analysis of proposals. Some could be criminalised and put in prison for up to four years.

On 27th January 2022 the bill will go to Committee Stage where Peers will have the chance to debate each amendment and press for responses from the Government. Usually there are no votes at this stage as Members seek to sound out what Ministers make of their proposed changes. Voting takes place during the Report Stage, which is expected to be in the middle of March.

In the last week before the summer recess, the Nationality and Borders Bill had its Second Reading in the House of Commons – a two-day debate, after which MPs voted for it to pass through to its next parliamentary stage in the autumn.

What we learnt from the second reading

The Bill is currently at the report stage which gives MPs an opportunity, on the floor of the House, to consider further amendments (proposals for change) to a Bill which has been examined in committee.

The Jesuit Refugee Service asks “Where is our shared sense of humanity?” JRS UK has condemned plans put forward in the Nationality and Borders Bill which seeks to punish people seeking safety for how they travelled to the UK, and risks violating international refugee law. Contact your MP to raise your concern about refugees and asylum seekers in the UK.

IMIX  is a team of professional communication experts who want to change the conversation about migration and refugees to create a more welcoming society. Read more about the Bill and what we can do in IMIX’s blog post.

We pray that we may be people who help create opportunities for dialogue and friendship which overcome labels like refugee or migrant.

We ask for an end to the mistrust and fear often shown towards people who come from different places or backgrounds, especially those who flee their homes in search of safety.

May we seek to create relationships which recognise mutual dignity and allow us to see one another as sisters and brothers. 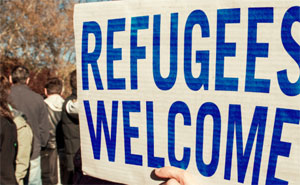