Father Martin’s New Book: The Certainty of Being Loved 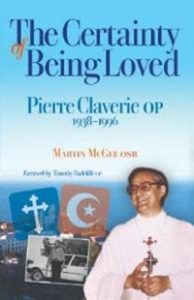 The Certainty of Being Loved, written by Fr Martin, is perhaps best described as a spiritual biography. It traces the spiritual journey of Bishop Pierre Claverie OP, born in 1938 in Bab el Oued, Algiers, the fourth generation of a family of European settlers. As a young man he experienced the anguish of the Algerian war of independence (1954-1962), and later the bitterness of the Algerian civil war (1992-2002). Growing up in Algiers, Pierre was totally unaware of his Muslim neighbours who made up ninety per cent of the population. In his own words he lived “in a colonial bubble.” Continue reading

“The Algerian martyr Blessed Pierre Claverie is one of the great witnesses of our time, deserving of a place next to Oscar Romero or Dietrich Bonhoeffer, yet is little known so far in the wider Church.” – Austin Ivereigh

Due to be published shortly, the book will be available in the Abbey Bookshop in the Narthex when COVID-19 restrictions allow.